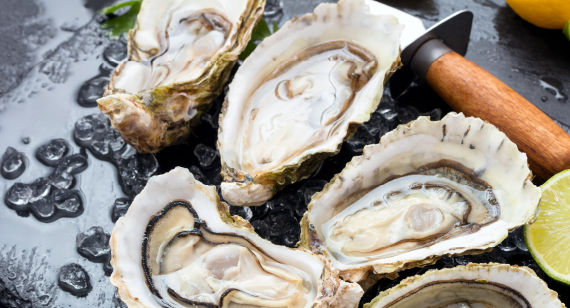 If you enjoy raw oysters often, you may already be among the dozens of unlucky Canadians who have become familiar with Vibrio parahaemolyticus over the past 25 or so years.

V. parahaemolyticus is a bacterium that can accumulate in shellfish. Usually referred to as just Vp, it can cause very unpleasant and potentially dangerous gastroenteritis through consumption of raw and undercooked seafood. The illness is most often associated with oysters, since they are frequently eaten raw.

Vp thrives in warmer water and it is somewhat rare in Canada; the first outbreak of Vp-related illness in this country was reported in British Columbia only in the late 1990s. Still, as the oceans warm, Vp's population and range are expanding and in some regions of Canada, it is now the most common seafood-associated infection. A number of outbreaks have been recorded since that first one in the 1990s, prompting consumption advisories that have had significant impacts on the shellfish industry.

Regulators, in close collaboration with the shellfish growers and processor industries, continue to enhance programs to reduce the risks associated with the consumption of raw shellfish.

Katie Eloranta of the Canadian Food Inspection Agency (CFIA) says extensive collaborative research is underway, gathering the knowledge needed to increase the effectiveness of current strategies for managing Vp in Canada, and enable regulators to trace infections back to their source with greater precision.

"We know there's a lot of diversity in the population along the coast—different types and subtypes of the bacteria," says Ms. Eloranta, Head of Microbiology and Virology at CFIA's laboratories in Burnaby, BC, "But, unlike some other foodborne pathogens such as E. coli or Salmonella, we don't yet have the detailed genetic information we need for effective source tracking in the case of an outbreak, or to strengthen mitigation strategies to reduce the risk of outbreaks."

With support from the Government of Canada's Genomics Research and Development Initiative (GRDI), Ms. Eloranta and her CFIA colleagues are collecting and analyzing a wide range of genetic data on the bacteria.

Using nanopore sequencing techniques—high-speed, third-generation sequencing technology acquired with GRDI funding—the CFIA researchers have completed 40 reference genomes from Vp isolates collected at various places along the BC coastline over the past 20 years. With these fully closed genomes, researchers can better understand the genetic makeup of this diverse species—a crucial step toward enhanced risk management for Vibrio parahaemolyticus in Canada, and for pinpointing the origins of any future outbreaks that may occur.

As CFIA food microbiologist Sam Mohajer explains, "This is one of the lesser-known but important things about the GRDI: with a relatively small investment in this kind of basic research, GRDI can open the door to new research collaborations, leveraging new investment from other agencies and institutions—and that's exactly what has happened with this project."

The fully closed genomes compiled by Ms. Eloranta and her team are now helping to inform the work of a major research collaboration funded by Genome British Columbia (Genome BC) and the BC Ministry of Agriculture. The research partners—CFIA, the BC Centre for Disease Control and the University of British Columbia—will collaborate in developing new tools to support food safety investigations and outbreak management related to Vp.

Ms. Eloranta, co-leader of the project, says the reference genomes are the framework needed to support characterization of the several thousand Vp isolates collected by the CFIA over the past two decades.

"As this work proceeds, we acquire more and more knowledge about the characteristics of different strains of the bacteria," explains Ms. Eloranta, "Which types are prevalent in different coastal areas, for example, as well as properties such as virulence and antimicrobial resistance—information that's essential to developing genomic tools to improve and refine detection and mitigation strategies to better protect public health and the industry."