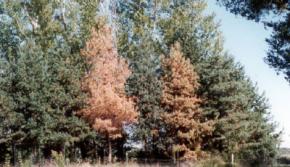 January 22, 2018
With funding from the GRDI, scientists from Natural Resources Canada and the Canadian Food Inspection Agency developed a molecular test that identifies the presence of living nematodes. September 23, 2014
A key to the successful outcomes of the Genomics R&D Initiative has been to ensure Canadian researchers have the tools they need to explore the almost infinite potential of genomics to enhance the health, safety and economic well-being of Canadians.

Cutting tree breeding down to size

July 18, 2013
A research project funded by the Genomics R&D Initiative at Natural Resources Canada has developed novel methods that will revolutionize tree breeding. Among other management measures, Canada's forest industry plants some 650 million trees every year.

July 18, 2013
With funding from the Genomics R&D Initiative, researchers at Natural Resources Canada were able to develop a new, DNA-based test for Sudden Oak Death, a fungus-like disease that has killed a wide variety of trees and plants in California and Oregon.

July 17, 2013
As a result of the Quarantine and Invasive Species research project funded by the Genomics R&D Initiative, Canada now has the capacity to quickly and accurately identify thousands of organisms, from insects to plant viruses, which can cause billions of dollars in damages.
Report a problem on this page