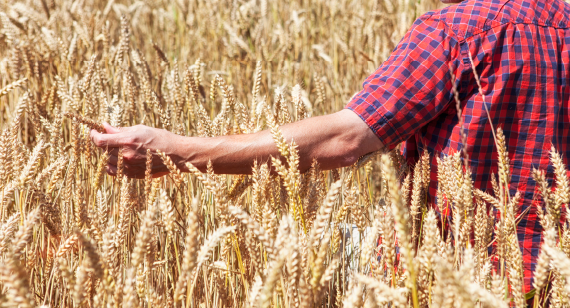 If you've ever eaten pasta, there's a good chance it was made from durum wheat grown in Canada—the country that accounts for more than 50 percent of global durum exports.

Supported by funding from the Government of Canada's Genomics Research and Development Initiative (GRDI), a team at the National Research Council of Canada's (NRC) Aquatic and Crop Resource Development Research Centre in Saskatoon is building new knowledge aimed at ensuring Canadian durum wheat continues to be a dominant player in the global marketplace.

While it makes great pasta, durum, like all cereal crops, is susceptible to a number of diseases, and is especially vulnerable to fusarium head blight. Otherwise known as FHB, it is among the most serious and difficult to control diseases affecting cereal crops—not only reducing yield, but also producing a toxin that can leave a crop unsuitable for human or animal consumption.

Dr. Pierre Fobert, Program Director at the NRC, explains that, "Durum just doesn't have the same genetic resistance to FHB that breeders have been able to bring to other types of wheat."

And there's another issue: "Even what looks like a minor FHB infection can produce a lot of the toxin that makes the wheat inedible," says Dr. Fobert. "So, we also want to improve durum's resistance to the accumulation of this toxin."

It takes a village (of genes)

As Dr. Fobert explains, it takes the combined effort of a number of genes, each with a minor effect, to provide effective resistance to FHB and toxin accumulation.

"Because each gene has such a small effect on its own, it's difficult for breeders to know just from looking at a plant whether all or even most of these genes have been maintained from one step in the breeding process to the next," says Dr. Fobert. "This is where genomics can really help."

In a previous GRDI-funded project, the NRC team identified molecular markers showing the location of a number of genes associated with FHB resistance in durum wheat. In this project, the team has been working to fine-tune these markers, and put them to work.

"It's very difficult in terms of time and effort and cost to pinpoint the exact location of these resistance genes," says Dr. Fobert. "But with the new GRDI funding, as well as support from the Saskatchewan Wheat Development Commission, the Alberta Wheat Commission and Genome Prairie, we've been able to do what is called fine mapping to really narrow down the section of genome where the key resistance genes are located."

With this information, the NRC researchers have developed several lines of durum wheat that show promise as breeding stock for FHB resistance. "We've gone through 8 generations now in the greenhouse," says Dr. Fobert. "With each generation, we've kept only a handful of plants—the ones with the desired combination of the resistance markers we've identified—giving us these lines that carry these markers consistently from one generation to the next."

"Building genetic resistance to FHB in durum has been a major struggle for many years due to the lack of robust resistance genes and the tools to track the genes," says Dr. DePauw. "Now, thanks to a number of collaborators working on different aspects of the problem—the NRC team led by Dr. Fobert, the AAFC-Swift Current team, including Dr. Ron Knox and Dr. Yuefeng Ruan, and the University of Saskatchewan Crop Development Centre led by Dr. Curtis Pozniak, all building on the work of now-retired AAFC durum researcher Dr. John Clarke—they are close to assembling the massive suite of genes needed to combine resistance to FHB with good pasta making quality in a plant that grows well in farmer fields."

Out in the field

Field testing is the next step. "You really need to see what happens with these plants in the real world—whether the transmission of resistance markers changes as growing conditions change from one growing season to the next and so on," says Dr. Fobert, "So, we have a few years of work ahead of us yet."

Regardless, Dr. Fobert and his team are confident the lines they've developed will stand up in field testing, and offer durum wheat breeders new options to enhance durum's resistance to FHB in the future—and a welcome reassurance to pasta lovers everywhere.